A Jewish wedding ceremony is a beautiful expression of the love and devotion shared by two individuals. The basic elements include Ketubah (marriage contract), Chuppah, Kiddushin (consecration ceremony), Nisu’in (nuptial ceremony), and Sheva Berachot (seven benedictions) and breaking a glass underfoot. In some traditions, the bride circles the groom seven times to signify her acceptance of him as her husband. 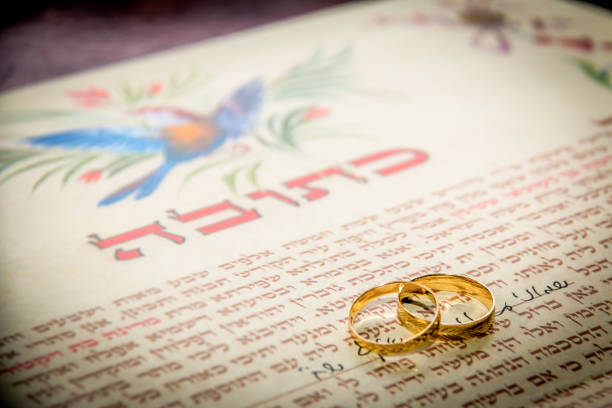 From ancient times in the Middle, East marriage was seen as part of God’s plan for human life and relationships. Jews have always considered marriage an important institution that should be supported and protected by community members and institutions like synagogues. Even though marriages are often made on secular terms nowadays, they have still considered a religious contract in Jewish law.

If you wanted to know about Jewish wedding blessings, just click it here.

What Is A Rabbi?

A rabbi officiates the ceremony and witnesses sign the Ketubah to attest to the couple’s commitment.

One of the main elements of a Jewish wedding is the Ketubah, which is essentially a marriage contract. The Ketubah is a legally binding agreement, often beautifully decorated and signed by two witnesses. It outlines the rights and responsibilities of the bride, groom, and their respective families. The document was historically designed to protect women’s rights in cases where they might be abandoned financially or otherwise.

This document outlines all the financial and legal aspects of married life, as well as any other expectations or terms that both partners agree to uphold. It helps ensure that neither partner feels taken advantage of or abandoned by their spouse at any point during their lives together. Many couples choose to have a beautiful Ketubah made specifically for their wedding, and it is often signed by witnesses as well as the rabbi who officiates the ceremony.

Another important element of a Jewish wedding is the chuppah, which is a canopy that represents the couple’s new home. The Chuppah is an ancient symbol of shelter that protects and contains the sacred marriage vows made by the couple. This canopy may be open on all four sides or curtained off from onlookers by the fine fabric. A cloth spread over a pole held aloft by family members signifies this protection during the ceremony. In most modern weddings guests stand around or under it as the bride enters with her father (or another male relative) and circles her groom seven times.

This symbol of shelter is typically held up by four family members during the ceremony, and guests often stand around or under it as the bride walks around her groom seven times. The number seven is significant in Judaism because it represents completeness or perfection, so this act signifies the couple’s commitment to each other.

The actual marriage ceremony itself consists of two parts: Kiddushin and Nisu’in.

Kiddushin, literally “sanctification” or “consecration”, is the first of two Jewish marriage ceremonies. It involves the groom giving an object of value to the bride, signifying his commitment to support her financially. The ring is a popular choice for this purpose, but in ancient times coins, property deeds, or even livestock could be used.

The second stage, Nisu’in (literally “elevation”), occurs after the couple has consummated their relationship and includes7 blessings recited over a cup of wine.

The Sheva Berachot (“seven blessings”) is said by seven guests who have been chosen in advance for this honour. They express wishes for the couple’s happiness and continued love for one another.

Breaking a piece of glass is a popular custom at Jewish weddings. It is done after the Nisu’in ceremony and serves as a reminder of the destruction of the ancient Temple in Jerusalem. It also symbolizes the fragility of life and the need for couples to treat each other with care.

Jewish weddings are joyful occasions that affirm the beauty of marriage and provide couples with lasting memories. With their rich symbolism and traditional elements, these ceremonies are truly unique expressions of love.

If you wanted a photographer for your wedding, check out Legacy Union.